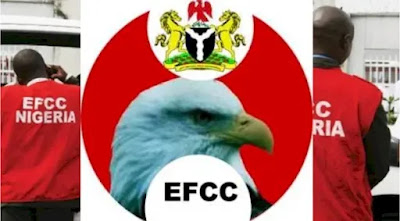 The Economic and Financial Crimes Commission has arrested one Precious Omonkhoa for an alleged $200,000 (about N108 million) bitcoin investment scam.
Omonkhoa was arrested on November 8, 2021, in the Ikoyi area of Lagos, following credible intelligence received by the commission about his illegal activities.
He allegedly posed as Moshem Cinch, a Swedish national, to defraud unsuspecting victims of their hard-earned money by claiming that he runs a bitcoin scheme, where investors get huge returns.
A statement on Friday by the EFCC spokesman, Wilson Uwujaren, titled, 'EFCC arrests man for $200,000 cryptocurrency fraud in Lagos,' said the preliminary investigation also revealed that the suspect engaged in a dating scam and had defrauded two victims in Canada.
The anti-graft commission said, "Upon his arrest, the suspect confessed to have laundered the proceeds of his fraudulent activities by purchasing a piece of land worth $150,000USD through bitcoin from CASA-Cubana, a project being run by the Cubana Group.
"The sum of $50,000 was found in his bitcoin wallet. The suspect will soon be charged to court."
Meanwhile, the Sokoto Zonal Command of the EFCC has secured the conviction of one Aminu Ahmed before Justice Malami Dogondaji of the Sokoto State High Court on a one-count charge of obtaining N2.549 million by false pretence.
The convict reportedly tricked one Ya'u Danladi under the guise of being his business partner and obtained the said sum meant for the supply of 900 bags of cement.
Ahmed allegedly received the money through an interbank transfer from the complainant's account which he diverted to his personal use.
Thereafter, he became evasive and neither supplied the cement nor refunded the complainant.
He pleaded guilty to the charge and Dogondaji sentenced him to seven years imprisonment with an option of N200, 000 fine.
"The court also directed the convict to pay restitution in the sum of N2.549m to the nominal complainant," a statement from EFCC read.
Don't forget to give your feedback on the comment section down below.
Tags
Social
Related Article